The “unbeatable” drilling record has been beaten 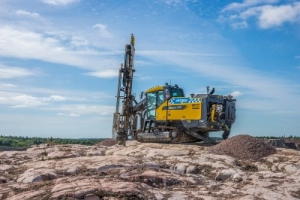 Atlas Copco claims to develop some of the most fuel-efficient drill rigs in the industry. To put its premium SmartROC drill rigs to the test, an experiment was designed. Could a SmartROC T40 set a new industry record in its class and drill 100 metres in less than two hours with a fuel consumption of less than 40 litres?

Drilling to a depth of 100 metres took the SmartROC T40 one hour and 53 minutes, with only 34.5 liters of fuel consumed. Hole straightness was 90 per cent for all five holes drilled during the test, which means that 18 of every 20 metres were perfectly straight. The initial experiment was conducted in Sweden under conditions that make it reproducible by others. “We wanted to create a simple controlled test that anyone in the world could duplicate. The undeniable results show just how well the tough SmartROC performs,” says Atlas Copco Global Product Manager Mats Birkestål.

During the last few months, owners of any SmartROC drill rig across the world have been testing their rigs and reporting extraordinary results. Even seemingly unbeatable records are meant to be broken. New incoming records indicate that fuel efficiency and earnings per cubic meter are greater using a SmartROC than any other surface drill rig on the market today. The efficient SmartROC surface drill rigs have truly become flagships for energy savings.

The accumulation of data continues and any rig owner can perform the test and report results at mostfuelefficient.com/leaderboard.

For optimal drilling efficiency, the high-tech SmartROC drill rigs are equipped with cutting-edge components and features to minimize the cost of drilling and blasting. The 225-horsepower engine produces only as much energy as needed at any given time during the drilling process. Operators can adjust flushing air volume and dust collector fan speed as required, rather than unnecessarily running at full power. Engine and compressor speed self-adjust according to demand.

For more information, visit http://www.atlascopco.ca/
More in this category: « Update your workplace inspections schedules  |  Taseko updates operating status of Gibraltar »
back to top